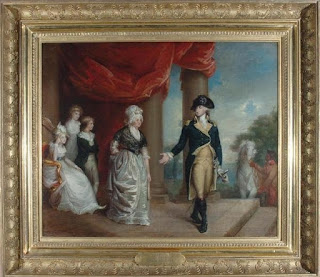 Another exceptional lot brought to Sunflower Auction during the summer of 2007 was an oil on canvas painting by early American artist Jeremiah Paul (? – 1820). It was to become a text book example of how and why reserves can be toxic to auctions – especially when born of a consignor’s excessive optimism. Needless to say, the work went unsold in 2007.
It was as I concluded my earlier piece on the consignor’s Vincent van Gogh letter to G. Albert Aurier that I began thinking of the Jeremiah Paul adventure, specifically that it deserved a blog post of its own. First step was to search around for my old essay. In the process I discovered – to my great surprise – that the work had very recently returned to the art market in Dallas, Texas – on May 18, 2015, listed as lot 42218 in Heritage Auction’s American and Political Auction #6145. Its hammer price was recorded as (US) $38,000. 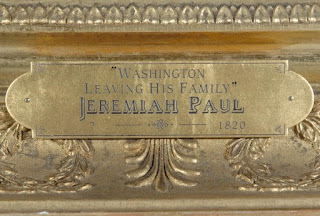 Despite its “failure to launch” at Sunflower Auction almost eight years earlier, the adventure we had during pre-auction promotion was rather interesting. Our most memorable outing was when Sunflower Auction’s proprietor and I accompanied (a fancy way of describing the loading of the Ft. Knox-like storage crate into the back of a Chevy Suburban and driving to midtown Kansas City) the painting to the Nelson-Atkins Museum of Art’s Conservation Lab, where an examination by conservationists and technicians revealed previously obscure physical attributes that we were able to append to the work’s 200-plus year history.
One such detail which was omitted from my original essay was that an infrared examination revealed that Paul had initially painted Washington’s coat tails much longer than they appear in the final wrk. No, it doesn’t really make much difference in the greater scheme of things, but to anyone interested in a painter’s creative process, it is fascinating.
Here is my essay that served as the work’s description during its October 30, 2007 public offering: 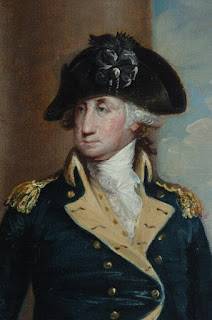 George Washington (February 22, 1732 – December 14, 1799) was a central and critical figure in the founding of the United States, and is commonly referred to as father of the nation. He led America’s Continental Army to victory over Britain in the American Revolutionary War (1775-1783), and in 1789 was elected the first President of the United States of America. He served two four-year terms from 1789 to 1797, winning reelection in 1792. His devotion to republicanism and civic virtue made him an exemplary figure among early American politicians.
Untraced in private hands for 200 years while in private hands, Sunflower Auction is proud to present Philadelphia artist Jeremiah Paul’s historical oil-on-canvas “Washington Leaving His Family,” a romantic portrait of Washington leaving Martha and his grandchildren after President John Adams’ administration appointed him Lieutenant General and Commander in Chief of the United States Army in 1798. The appointment was a reaction to France’s threat of war against the United States, and resulted in France backing away from its threat, rather than face the father of the nation, hero of the revolution – and their one-time ally. 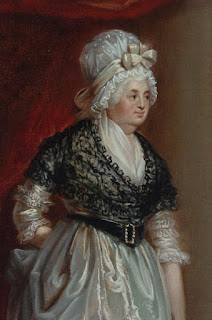 Beautifully executed and steeped in symbolism, the painting enshrines George Washington as the first (and most revered) figure in the pantheon of American heroes, and subsequently his family as a domestic symbol of the American Revolution. A backdrop of windswept red drapes recall the universal red flag of war, defiance and revolution as they entwine themselves between two polished granite columns representing, and nearest to, George and Martha. Two tassels hang down the Commander in Chief’s column, representing his pivotal role in the accomplishment of the American Revolution, and return to duty.
Washington’s sword is carried at his side – a symbol of strength, courage and authority, while bidding farewell to his wife with his ungloved right hand. It would seem that Martha did not wholly approve of her husband accepting the appointment, and this is reflected by her right hand being held firmly behind her back. 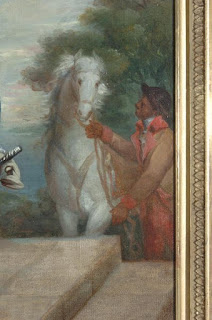 Further confirmation of Washington’s almost metaphysical presence is found in Paul’s depiction of the natural world around him. A mostly cloudy sky – darker nearer the zenith than horizon, symbolizes the brewing storm brought by France’s threat of war, while the brighter horizon symbolizes optimism about the future. In the distance (and beneath Washington’s outstretched right hand) a cypress tree and weeping willow stand along the banks of the distant Potomac, symbolizing the death and mourning brought by war. Furthermore, his faithful white horse, Old Nelson, almost appears to be haloed by a cloud break above his head.
One finds additional significance in the rare depiction of three grandchildren – instead of the usual pair of George Washington Parke Custis (1781-1857) and Eleanor Parke Custis (1779-1852). All were the offspring of Martha’s son – and General Washington’s wartime aide, John “Jacky” Parke Custis (1754-1781), but seldom was Elizabeth Parke Custis (1776-1831) depicted with her brother and sister. Eleanor and G.W. had been sent to Mount Vernon almost immediately after their father’s untimely death from typhoid fever at Yorktown, while Elizabeth stayed with her mother, Eleanor Calvert. 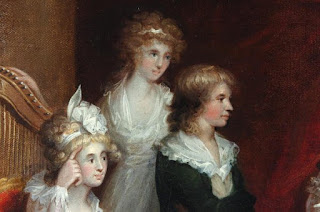 The painting was finished in 1798 and disappeared after being sent to England in 1800 for engraver Edward Bell to copy. Copies of the engraved scene were produced during the nineteenth century, each exhibiting distinct differences in background, pose, coloration and shading. Life magazine profiled a copy of the engraving that surfaced in London in 1959, and once again highlighted the “lost” status of this, the original.
Jeremiah Paul Jr. was part of the early generation of great American artists that included the preeminent portraitist Charles Wilson Peale, as well as other renowned Washington portraitists Edward Savage and Gilbert Stuart. Paul received training by the venerable Charles Wilson Peale alongside his son, Rembrandt Peale. Paul is known to have engaged in small tasks for Gilbert Stuart including the painting of lettering in some of the latter’s portraits.
Paul is credited as one of the founders of Philadelphia’s Columbianum exhibition of 1795. In 1796 he joined a firm that would become known as Paul, Rutter & Clarke. By 1803 he was traveling around the country painting miniatures, portraits, signs, and conducting exhibitions. He died near St. Louis, Missouri on July 13, 1820.
Signed “J Paul Junr” in red to the lower left corner. Mounted in a Federal-era gilt frame, with nameplate. 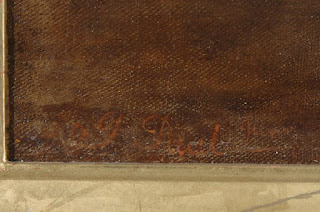 Condition
Bright, crisp and well preserved for its age. The painting was professionally cleaned in the latter portion of the 20th century. UV examination reveals a small spot of restoration above GW’s head and retouching of abrasions in several areas. Infrared study reveals very few trace lines, indicating Paul executed the painting mostly freehand. Texture transfer to canvas from liner is evident. Close examination of the signature field reveals residual brown background retouch at a few points over the original signature strokes. 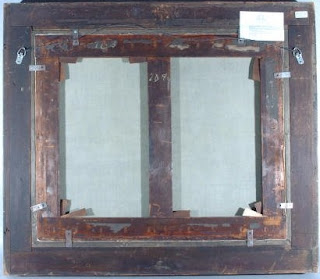