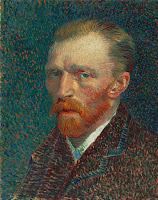 I worked as a researcher and appraiser for Sunflower Auction from 2006 until 2008. I think it was late spring or early summer 2007 when we were contacted by a family with several significant historical pieces of fine art, documents, and militaria they were interested in selling. Our main contact was a typical high maintenance “more-dollars-than-sense” personality, though harmless enough, and we at Sunflower had quite a memorable time being equal parts amused and exasperated by his tales of historical derring-do.

In retrospect I think we went a bit overboard for him in terms of presentation, but the experience did produce a few essays by yours truly for inclusion with the auction lot descriptions, and for some reason I’m thinking they’ll make good blog fodder.
Since I’m still in an artsy mood from recounting my Thomas Hart Benton interview project the other day, I think the first of these will keep the theme and examine a rare and historic letter from an artist who I came to deeply admire, Vincent van Gogh.
Vincent van Gogh’s Letter to G. Albert Aurier, 10 or 11 February 1890 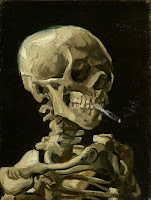 Nevertheless, in the case of Vincent van Gogh, in my opinion, despite the sometimes misleading strangeness of his works, it is difficult for an unprejudiced and knowledgeable viewer to deny or question the naïve truthfulness of his art, the ingeniousness of his vision.
– G. Albert Aurier, Mercure de France, January 1890
Vincent van Gogh (1853-1890) was a Dutch Post-Impressionist artist. His paintings and drawings include some of the world’s best known, most popular and most expensive pieces. Van Gogh spent his early life working for a firm of art dealers. After a brief spell as a teacher, he became a missionary worker in a very poor mining region. He did not embark upon a career as an artist until 1880. Initially van Gogh worked only with somber colors until he encountered Impressionism and Neo-Impressionism in Paris. He incorporated their brighter colors and style of painting into a uniquely recognizable style, which was fully developed during the time he spent at Arles, France.
He produced more than 2,000 works, including around 900 paintings and 1,100 drawings and sketches, during the last ten years of his life. Most of his best-known works were produced in the final two years of his life, during which time he cut off part of his left ear following a breakdown in his friendship with Paul Gauguin. After this he suffered recurrent bouts of mental illness which led to his suicide in 1890.
The central figure in Vincent van Gogh’s life was his brother Theo, who continually and selflessly provided financial support. Their lifelong friendship is documented in numerous letters they exchanged from August 1872. Van Gogh, pioneer of Expressionism, had an enormous influence on 20th century art, especially on Fauvism and German Expressionism.
Sunflower Auction is proud to present one of the most important letters written by Vincent van Gogh, responding to the author of the only review of his work to appear in his lifetime. He expresses his gratitude to G. Albert Aurier and discusses his approach to painting, contemporary artists and famed Sunflowers paintings. The text reads like a window on his soul, revealing clues about his battered mental condition, making him subject to storms of emotion and insecurity that would plague him until his suicide just five months later.
The Isolated One: Transcending Heritage?
Thank you very much for your article in the Mercure de France, which surprised me a good deal. I admire it very much as a work of art in itself, it seems to me that you paint with words; in fact, I encounter my canvases anew in your article, but better than they are in reality, richer, more meaningful… Anyway – what I am trying to say is that things seem to have mistakenly become attached to my name that you would do better to link to Monticelli, to whom I owe so much. I also owe a great deal to Paul Gauguin…
– Vincent Van Gogh to G. Albert Aurier, February 1890 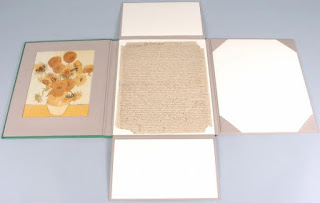 G. Albert Aurier’s glowing review of van Gogh’s work in the January 1890 issue of the Mercure de France asserted that although he had not “transcended his heritage,” he was not an “unworthy descendant of the old Dutch masters. Van Gogh was rather uncomfortable with the praise lavished by Aurier, and his letter to the author was an exercise in artistic self-deprecation.
You may realize now that your article would have been fairer and – it seems to me – consequently more powerful, if, when dealing with the question of the future of ‘tropical painting’ and the question of colour, you had – before speaking of me – done justice to Gauguin and Monticelli. For the role attaching to me, or that will be attached to me, will remain, I assure you, of very secondary importance.
In February 1890 van Gogh wrote to his sister, “I thought the article by Mr. Aurier – leaving out consideration whether I deserve what he says of me – very artistic and very curious in itself. But it is rather like this that I ought to be, instead of the sad reality of how I do feel.”
Yet as is often the case with truly visionary and original artists, van Gogh’s contemporaries understood his work better than its creator did. A letter from his devoted brother, Theo, dated April 23, 1890, describes how Monet commented that Vincent’s pictures were “the best of all in the [Vingtistes] exhibition.” Serrat went to Theo’s house to view more paintings and was enthralled to the point of saying if had he no style of his own he would change course and ‘seek what you are seeking.’
Only one of van Gogh’s paintings would be sold during his lifetime. The Red Vineyard was purchased by Anna Boch (the sister of a friend), after the Vingtistes exhibition in Brussels in 1890. The sad irony is that barely a century later the work of Vincent van Gogh, a painter that in his own time struggled to pay for the paints he used – and even reused canvases for economy, would command tens of millions of dollars.
Aurier never changed his views on van Gogh’s work and corresponded with the artist’s devoted brother Theo van Gogh well after Vincent’s death in July 1890. Theo clearly favored Aurier for having been “the first to appreciate him, not only on account of his greater or smaller capacity to paint pictures, but you have read these pictures, and by doing so you very clearly saw the man,” and asked Aurier to help him with a biography of Vincent, and an “elaborate volume of illustrations and reproductions of certain letters.” 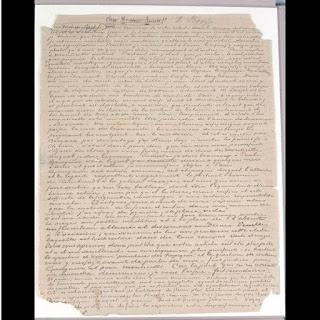 Symbolism and Sunflowers
And how could we explain that obsessive passion for the solar disk that he loves to make shine forth from his emblazoned skies, and, at the same time, for that other sun, that vegetable star, the sumptuous sunflower, which he repeats, tirelessly, monomaniacally, if we refuse to accept his persistent preoccupation with some vague and glorious heliomythic allegory?
– G. Albert Aurier, Mercure de France, January 1890
Aurier’s review asserted that van Gogh was almost always “a Symbolist…who feels the continual need to clothe his ideas in precise, ponderable, tangible forms, in intensely sensual and material exteriors.” 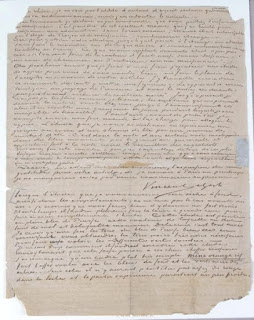 A year later in 1891, Aurier outlined the role of symbolism in visual arts in a Mercure de France article called “Symbolism in Art.” In it he recognized and promoted what was to become known as the “Symbolist” school. He believed the purpose of visual arts was to be “ideational, symbolical, synthetic, subjective, [and] decorative.” Symbolism was to be used wherever and whenever possible, extending its reach even to depictions of the natural world where nature should be observed “by way of the dream.”
Sunflowers has become one of the world’s best-known works of art. Considering the challenges van Gogh faced in his life, it almost seems appropriate it has become his best-known work. Artists have used sunflowers as symbols to express ideas such as piety. For the one-time cleric van Gogh, they seem to have symbolized even more:
Let us suppose that the two canvasses of sunflowers which are present at the Vingtistes have certain qualities of colour, and that they also symbolize ‘gratitude’. Are they any different from so many other pictures of flowers, more skillfully painted, which are not yet appreciated enough – the Roses tremieres and the Iris jaunes by old Quost, the magnificent bunches of peonies which Jeannin produces in such abundance? You see, I find it very difficult to make a distinction between impressionism and other things. I do not see any use for much of the sectarian thinking we have seen these last few years, but the absurdity of it frightens me.
Interestingly, Aurier’s review singled out cypress trees in van Gogh’s work as images “that expose their nightmarish, flamelike, black silhouettes.” Bearing this in mind, perhaps the strangest twist in van Gogh’s letter comes in the form of him promising to send Aurier a study of cypresses “so characteristic of the Provence landscape” – and at the same time a tree that is often associated with death. Considering Aurier’s assertion of van Gogh as a Symbolist painter and van Gogh’s bouts with mental illness, it is tempting to view the curious choice of cypresses almost as a premonition of his own death.
Raison d’être
The historical significance of van Gogh’s letter is clear. Not only does he take the opportunity to discuss his approach to art, he also praises his contemporaries, references his Sunflowers canvases, and lays bare his approach to his work with a brutal frankness. It illuminates van Gogh – the artist and the man; a man wracked by feelings of inadequacy and inferiority. 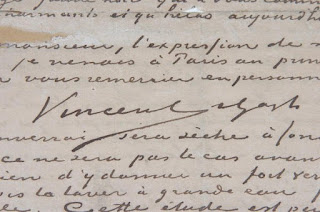 The timeless appeal of van Gogh and his work is evinced by his work periodically making headlines today. Recently, the discovery by X-ray of another painting, “Wild Vegetation,” underneath “The Ravine,” at the Museum of Fine Art, Boston, made headlines all over the world.
Size: 10.6 x 8.3 in. (26.9 x 21.1 cm)
Provenance: Profiles in History, Sotheby’s, J. Williame Chateauroux