The so-called “Trump Effect” hinted at in my March 15th post seems in full effect now, based on the strength of Sotheby’s June 21st Impressionist and Modern Art sale, which not only beat the same sale in 2016 by 45 percent, it also saw the record for Wassily Kandinsky (1866-1944) smashed – twice.

The first smashing painting was Murnau—Landschaft mit grünem Haus (1909), painted in his Fauvist period. It closed at a breezy $26.4 million, higher than the last comparable painting, at approximately $17 million in 2013. 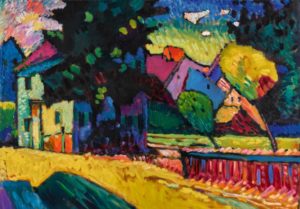 It’s result – and in fact that of the entire sale – $187.7 million, may be seen as a barometer of the brighter mood of the higher end art market, even if only a few lots rose above their estimate.

It doesn’t even really matter if the $41 million paid for Bild was within the estimate range – the record is impressive. The previous record for a comparable Kandinsky, $21 million set at Sotheby’s in 1990 for Fugue (1914) equals $39.3 million adjusted for inflation today.

As you might expect, Sotheby’s is crowing these days and I expect there will be drinks all around this weekend.