‘In a sane world the idea and the law will dictate, and we shall have no more use for personal dictators and ruling gangs. The politicians will come to heel when they realize that the wind is setting steadily in this quarter of the compass.’ – H.G. Wells, The Rights of Man, or What Are We Fighting For? (1940) 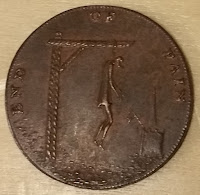 Child of the enlightenment Thomas Paine (1737-1809) is remembered today as one of America’s most famous revolutionaries: deist, political activist and theorist, philosopher and journalist, Paine was also a leading proponent of transnational human rights. Author of several pamphlets vital to the American revolution such as ‘Common Sense’ (1776), and ‘The American Crisis’ (1776-1783), it was Paine’s ‘Rights of Man’ of 1791 that directly concerns this essay for it’s link to the ‘hanging Conder token.’

Benjamin Franklin had helped Paine emigrate to the United States in 1774, where he would write the pamphlets that would make him a household name. However by the early 1790s he had become harshly critical of George Washington – even coming to believe the president had conspired with Robespierre to imprison him. Paine moved to France in 1790 and of course involved himself with the French Revolution, even being elected in 1792 to the French National Convention – despite not speaking French. 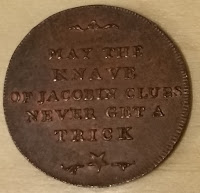 In 1791 he published ‘Rights of Man,’ a treatise establishing the legitimacy of revolution when a government fails to protect the natural rights of its people. Despite trying to make the case that his attack was aimed at despotic tendencies in the institution of monarchy and not the king himself, the landed classes and monarchy were not amused.

The pamphlet concludes by proposing a reformation of England’s government along American lines, including the abolition of hereditary titles, pushing for subsidized education, and a progressive income tax designed to prevent wealthy estates from establishing any sort of hereditary aristocracy.
Naturally Paine’s views were not popular with French or English aristocrats, and having been considered an ally by the Girondists but an enemy by the Montagnards, he was arrested and spent 1793-1794 in prison. Upon release he published ‘The Age of Reason’ (written 1793-94), a pamphlet which advocated deism, free thought and reason, while at the same time criticizing Christian doctrine and institutional religion. He remained in France until he was invited to return to the United States by President Thomas Jefferson in 1802.
But let us now jump back to ‘Rights of Man,’ which was published in two parts in March 1791 and February 1792. The second part was dedicated to Lafayette, and the pamphlet’s call for republicanism and social welfare caused him to be tried and convicted in absentia for seditious libel by the British crown.
Since he was living in France and therefore unavailable for hanging, a patriotic anti-Paine token was struck in copper in 1793 to vent the British spleen. ‘Conder tokens,’ sometimes called ’18th century provincial tokens,’ were privately minted coinage used in areas of England, Scotland and Ireland. Named after an early collector and producer of these unique pieces, numismatist James Conder (1761-1823), they generally came in three sizes, a 21 mm farthing, 29 mm halfpenny, and 34 mm penny.
A large variety of these tokens were minted with different themes, sometimes issued as low value coinage for specific businesses, since the British government did not produce their own small denomination coinage despite a chronic need dating as far back as the 14th century!
The obverse of this satirical anti-Thomas Paine Conder halfpenny token shows a figure hung from a gibbet, obviously meant to symbolize Paine, under the motto ‘End of Pain,’ and with an inscription on the reverse, ‘May the knave of Jacobin clubs never get a trick.’
Another version is known to exist, having on the reverse in raised relief over the pages of an open book, ‘The Wrongs of Man, Jany 21: 1793.’ Ever so full of pith and vinegar! 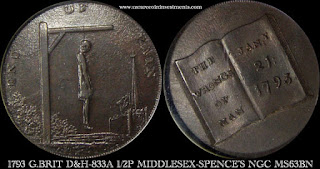 I’ve recently come across another Thomas Paine Conder halfpenny and will get to that shortly.