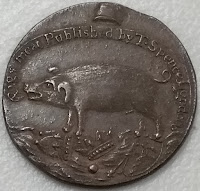 And on the heels of my last post about the anti-Thomas Paine halfpenny Conder token comes this one dedicated to Thomas Spence (1750-1814).
An English radical and advocate for the common ownership of land, Spence was one of the first to use the term ‘rights of man,’ beginning with his ‘Property in Land, Everyone’s Right’ in 1775, later reissued as ‘The Real Rights of Man.’
Like Paine, he also believed in bringing an end to aristocracy, but added to his list landlords. Universal suffrage, a social guarantee for those unable to work, and an unconditional basic income (what would today be called welfare), as well as the ‘rights of infants’ to live free from poverty and abuse. 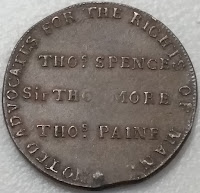 While he never left England, Spence did spend seven months in Newgate Gaol for high treason, and like Paine, was convicted of seditious libel and sentenced to twelve months.
Here is a good example of a Thomas Spence halfpenny, one of the lesser-known copper Conder tokens. It features on the obverse a pig running roughshod over the emblems of church, state and monarchy, with the Phrygian cap – sometimes called a liberty cap, symbolizing freedom and the pursuit of liberty above. From the mouth of the pig flies a ribbon inscribed with ‘Pig’s meat Published by T. Spence London.’ 29 mm in diameter.

The reverse bears the legend ‘Noted advocates of the Rights of Man,’ and names Thos. Spence, Sir Thos. More, and Thos. Paine.

This particular token may not be as desirable to collectors as the ‘End of Pain’ anti-Thomas Paine token, but it is still one of my favorites.