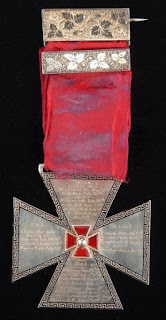 Another exceptional lot brought to Sunflower Auction during the summer of 2007 was this Union Army Civil War honor cross named to William A. Throop. For context see my remarks preceding my post about the Jeremiah Paul (American, ? – 1820) ‘Washington Leaving His Family’ oil on canvas from last June.

William A. Throop joined the 1st Michigan Infantry as a Second Lieutenant and was mustered out on August 1861. Honorably discharged 1865.

Even before army corps cap badges were conceived by General Daniel Butterfield, a Mr. E. Harmon had outlined a similar system to the Secretary of War Simon Cameron in a letter dated August 2, 1861.

Sir: I would respectfully invite your attention to a new method of distinguishing the Federal troops from those of the rebels in battle, of which I am the inventor. 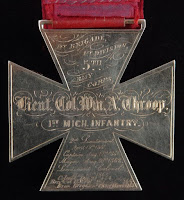 It consists in the use of badges of different colors or descriptions any one of which can be selected by the commander previous to any engagement thus preventing the knowledge by the enemy of the particular colored badge which shall be worn by our troops so that they cannot be decoyed within the range of the enemy’s batteries as they were in the battle of Bulls run by the display of the Federal flag. In other words the badge will answer the purpose of a countersign addressed to the eye. 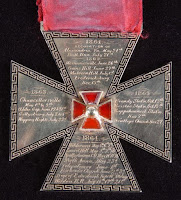 After General Butterfield made his similar recommendation to General Joseph Hooker in early 1863, Hooker issued his March 21 Circular outlining “identifying cloth badges for ready recognition” for each corps. Each Corps was assigned a specific pattern, with classes designated by color. By the war’s end, 23 of 25 army corps were officially recognized. Congress endorsed the symbolic significance of corps badges in 1866 stating:

All persons who have served as officers, non-commissioned officers, privates, or other enlisted men, in the regular army, volunteer, or militia forces of the United States during the War of the Rebellion, and have been honorably discharged from the service or still remain in the same, shall be entitled to wear, on occasions of ceremony, the distinctive army badge ordered for or adopted by the army corps and divisions respectively in which they served. 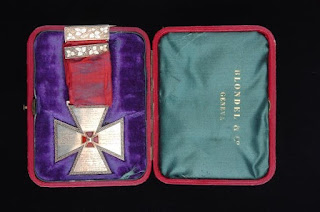 Thus, battlefield insignia became a badge of honor and distinction.

Includes a fantastic original CDV of Lt. Col. Throop, wearing the badge on his chest.

Condition Report: Both excellent, the original ribbon is slightly discolored and mostly detached