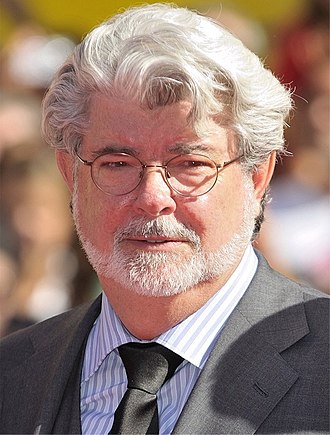 Okay. As a nine-year-old kid – and long before I learned to appreciate Stanley Kubrick and Arthur C. Clarke’s 2001: A Space Odyssey as the truest work of science fiction cinema possible, Star Wars was a really big deal to me, and that’s putting it mildly. George Lucas was a kind of film making god, on the level of George Pal. What Lucas said about the Star Wars universe was not to be questioned because it simply had to be true! How simple life once was.
We all know Star Wars fans can be an extreme and wonderful kind of crazy. In spite of knowing that universe doesn’t make perfect sense, some still try to project order and make it make sense. Nutters, right? What many forget – or perhaps don’t realize in the first place – is that Lucas was merely emulating the gaudy, mawkish and often politically ham-fisted ’50s sci-fi serials he worshiped as a kid, though armed with advanced film-making techniques of his time. Inconsistencies were bound to turn up.

Yet the same sort of scrutiny and vain attempts at rationalization happens with H.G. Wells’ earliest novels. Certainly I spent many hours of my youth going through The War of the Worldswith a highlighter, notepad and army of almanacs in a vain effort to establish the invasion year, hours in my school library pouring over maps of greater London in an attempt to pinpoint where Martian cylinders landed, and of course tracing the paths of the narrator and his brother. To this day fandom around The War of the Worlds continues this tradition, reverse engineering Martian fighting-machines, handling-machines, cylinders, all while humming the music from Jeff Wayne’s musical version.

Of course Wells didn’t dream as he wrote those early novels that they would eventually be scrutinized for practicality. To him they were parables, cautionary tales, social commentary disguised as satire.
Eventually I discovered the impressive body of literary criticism about Wells, with much attention given to his early scientific romances. At the same time I was reading every biography of him, not to mention his own autobiography, and learned and how and why these novels reflected his contemporary social and political views.
Despite this lifelong hobby of identifying and contextualizing Wells’s ideas, I’ve never had much interest in filling out the Star Wars timeline or character subplots beyond the most casual conversation. No, not everything in episodes IV, V and VI made sense. Episodes I, II and III had some seriously cringe-worthy moments and characters, but I was satisfied with the overall story the same way I am satisfied by a great steak dinner. I feast on the meat and potatoes, and push aside the Ewok and Jar Jar parsley.
So here we are on the eve of a new era for the Star Wars universe. Beyond finding myself missing a lot of the enthusiasm for these next chapters that I had for episodes I through VI, I feel not a little bit of skepticism about them. Perhaps it’s because Lucas checked himself out of the Skywalker universe and turned over the keys to the kingdom to one of my generation, J.J. Abrams. Checking Abrams’ filmography on IMDb, I realize I have only seen one other film listed among his credits – and seen by accident, I have to admit, Cloverfield, a mindless sci-fi movie about a monster wrecking New York City, as seen through the eyes of forgettable late gen-X hipsters that I enjoyed seeing expire one after the other. The movie I thought was enjoyable if viewed as a ‘couple of wasting hours of mindlessness.’ Abrams was a producer, which gives me hope. Why?
My biggest worry has to do with applying too much grime and realism to the Star Wars storyline. It’s a strange worry I suppose given that I’ve never had interest in comic book super heroes and tend to ignore the movies Hollywood churns out these days. The one exception was the recent Christopher Nolan Batman trilogy. Of course part of it could be sympathy for my son’s Batman phase which coincided with the movies. I took him to see the last installment, The Dark Knight Rises, which to my great surprise I enjoyed precisely because of its grimy appeal to realism.
That said, and as hypocritical as it almost certainly is, I don’t think I’ll be able to tolerate much of that in the new Star Wars movies. Give me another steak dinner and trust me to push aside the parsley. It doesn’t all have to make sense. Lawrence Kasdan, a writer for The Empire Strikes Back and Return of the Jedi, is directly involved in at least the first of the new installments, so there’s a one place to pin my skeptic-tinged hopes.
But above all, the biggest deal breaker to me is if Luke Skywalker did or does turn to the dark side, an idea that has Star Wars fandom abuzz. This simply cannot happen, as far as I’m concerned.
So, too much realism and the new installments will be regarded by me just as simple fan fiction.
Make Luke a Sith, and the ‘J.J.’ in director J.J. Abrams’ name might as well stand for Jar Jar. And I say that knowing Jar Jar Binks was recently mentioned by George Lucas as one of his favorite characters. Ouch, now my head hurts.
This post was mostly off the cuff and barely edited. It probably makes as much sense as Star Wars itself.