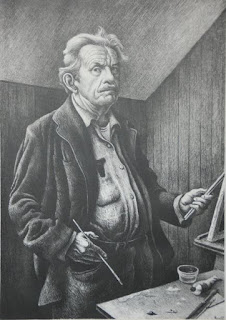 One of my more unusual historical research projects occurred during summer 2011, and involved what was thought to be an unpublished 1960’s audio interview with Missouri Regionalist artist Thomas Hart Benton (1889-1975).

At the time I worked as a researcher and appraiser for Dirk Soulis Auctions, a Kansas City metro area auction house that specializes in fine art. The interview had been consigned as part of an archival group of Thomas Hart Benton material, which also included typed transcripts of questions and answers.

The recording had been made on quarter inch reel-to-reel tape, common for the era. Naturally, confirmation that the recording and transcripts matched was vital before offering the lot at auction, and I was the only one at the firm with access to a reel to reel tape player. 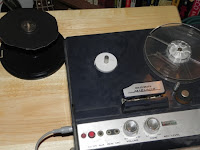 I brought the reels and transcripts back to my home recording studio and discovered – with horror – that the feed reels were too large to fit my player. The only option was to miracle together an outboard reel spindle from an empty CDr spindle pack, with the aid of a sharpened pencil, hand-trimmed CD backtray insert, and a Danish five Kroner coin spacer – useful here for it’s pierced center.

I lined the reel-to-reel’s signal directly into a cassette deck in order to have a more convenient recording of whatever played when I switched it on. Owing to the delicacy of the forty-plus year old quarter-inch tape and the, uh, tentative nature of my reel spindle engineering, I figured I had one shot at playback.

After a couple of test runs with an extra reel, I went for it: 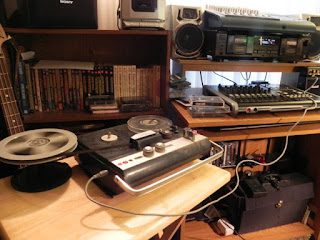 Success! I was able to record a few minutes of the original interview – enough to confirm the recording matched two of the transcripts, anyway. The lot went on to realize $675 (plus buyer’s premium) at auction that November.

Unfortunately I have no idea what became of the original recording, or if the interview was ever fully transferred to another format for preservation. But at the very least I still have a cassette recording of a few minutes of the interview with the late, great Thomas Hart Benton as a souvenir.