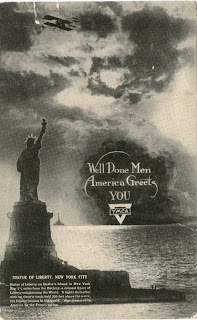 I was recently researching a group of items that included an eye-catching World War I postcard, published by the YMCA’s Department of Reception for Returning Troops. What compelled me to interrupt this important research project and scribble these lines was the second full-length album by my own band, Ares Kingdom, entitled “Incendiary” (2010, NWN! Productions), featured a famous illustration by American artist Joseph Pennell (1857-1926), and the postcard image seemed very familiar.

Pennell’s work had been a promotional poster for the USA’s Forth Liberty Loan campaign of 1918, originally entered by him into a competition sponsored by the Pictorial Division of the Committee on Public Information. Pennell had originally wanted to title the poster, “Buy Liberty Bonds or You Will See This,” but was overruled by the governing committee whose choice was, “That Liberty Shall Not Perish from the Earth.” The printing run would reach half a million.

By early 1918, the war had been raging for three and a half years. The dazzling speed with which winged flight had evolved since the Wright brothers’ first success in 1903 had effectively abolished distance in the minds of many, and reports of its military applications filled newspapers with tales of both heroism and terror. 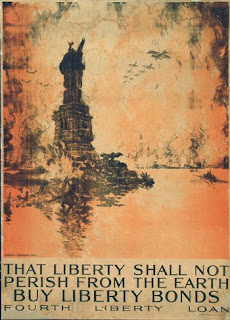 It was to the latter of these that Pennell now appealed. In stark shades of red, orange and black, Pennell depicted Lady Liberty strafed by, we presume, a squadron of German biplanes on their way to bomb New York City into submission. Liberty’s torch, the symbolic light of freedom, lies severed at the foot of the pedestal, while the waters of the Hudson lap against half her face which has been blasted away. German submarines – another source of technological terror brought about by the war, are seen cruising toward Manhattan Island, while merchant ships – noticeably out of scale, lie broken on the shore or sinking in the distance.

Not long after the poster’s publication in 1918, Pennell published an account of the poster’s creation in Joseph Pennell’s Liberty Loan Poster – A Text Book for Artists and Amateurs […] with notes, an introduction and essay on the Poster by the Artist, and Associate Chairman of the Committee on Public Information, Division of Pictorial Publicity, (J.B. Lippincott Co.). In addition to describing the complex and frustrating printing process, Pennell states that the illustration’s form “came into my head, and I jotted it down in my sketchbook, on the train, with a lithographic pencil, and though the bridges are in the air the design otherwise has scarcely been changed.”

Not being entirely sure which came first – the poster or the postcard – it seems unlikely to me that Pennell glossed over or purposely omitted mentioning this postcard if it was indeed the inspiration for his iconic poster. What seems more likely to me is that the YMCA, knowing how familiar Americans would be with the poster, published this photo composite in tribute.

Of course now that the war had ended in Allied victory and American troops were returning home to a grateful nation, the attitude and perspective are altogether different. This time the view is away from the city, toward the calm waters of the Atlantic Ocean. A vigilant battleship lies in the distance, helping keep the world “safe for democracy.” Lady Liberty stands whole – her crown now retouched and given a distinct glow, as a solitary pre-war Curtiss Golden Flyer biplane soars gracefully above.

It was now time to unleash the Roaring Twenties!