The Chimæra Chases a Tornado 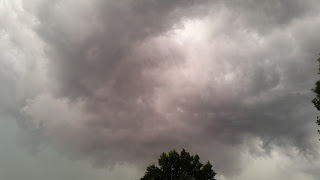 I seem to be the only person I know that has still never seen a B-2 Stealth bomber, even though the 509th Bomb Wing is stationed just 51 miles to the east at Whiteman Air Force Base.

Perhaps just as odd is that even after living 47 years in the heart of Tornado Alley, specifically the Kansas City metro area, I have still never seen a tornado. But that nearly changed last Wednesday, July 1st. An EF 1 tornado blew through Lee’s Summit, just a couple of miles west of our home – and just out of view.

The system that spawned it was broad, active, and moved from the north to the south – not generally how we think of tornado-producing systems traveling. As my wife, children, dogs and guinea pig planted themselves – with provisions – safely in our basement, I headed outside with my cell phone camera.

Awestruck, I watched the clouds boil, darken, rise and descend. The darkest and most threatening area of the storm passed overhead and seemed to slow just south of us, centered somewhere perhaps as close as between our house and 50 Highway – a distance of just one mile.

As I retreated from the steady rain and sheltered under the overhang of a neighbor’s house to the north, the seething mass began to organize and rotate as it pulled in other menacing clouds. Small funnel-like tendrils descended, danced and dissipated around what appeared to be the wall cloud of a larger vortex.

Seeing the system was continuing to move south, albeit slowly, I sensed no immediate danger – and I also knew the safety of our basement was just a five second dash away. I stayed out until the activity slowed and passed further to the south.

The earlier EF 1 tornado that had blown past the city’s Police Department headquarters also destroyed a fireworks tent in the Lee’s Summit North High School parking lot, tore away shingles from a series of strip mall businesses, snapped trees, and generally made a nuisance of itself. Fortunately no injuries were reported.

By the end of the evening, five reports had been issued by the Storm Prediction Center from around 6:30 pm until just after 7. All occurred in Jackson and Cass counties.