Gathering the Eagles in Kansas City 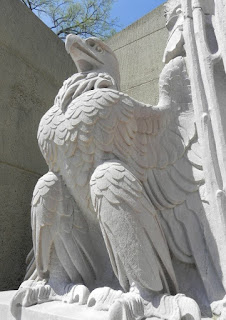 Last Thursday evening was the 2015-2016 planning meeting for my son’s Cub Scout pack. Our adult leaders include some of the most dedicated and forward thinking people I know, and I am proud to be part of the group. By the end of the evening, Cubmaster Michelle and I were discussing ways of impressing on our Webelos II boys the significance of the scouting trail they were on, and the big step some of them will take when they cross over into Boy Scouts of America next February.

As we discussed the idea of short outings with our Webelos dens, we thought of the Eagle Scout memorial and fountain located in Kansas City’s Gillham Park, at the intersection of 39th Street and Gillham Road…which in turn inspired this blog post. 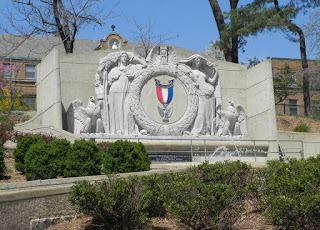 Having earned Eagle Scout in late 1982 (awarded January 1983), I have visited the memorial and fountain before, though until last spring – and not counting numerous drive-bys over the years – it had truly been donkey’s years.

Most weekends finds my family out and about, exploring historical and cultural places around the city and region. With my son’s increasing interest in pursuing the rank of Eagle in Boy Scouts, on April 19, 2014, we knew it was time for another visit.

A Scout is Thrifty

The memorial consists of a central allegorical scene above a fountain pool, and with two spiral staircases approaching the sculpture. The fountain was donated by Mr. and Mrs. John W. Starr, built by constructed by the Hoffman Cortes firm, and dedicated on October 6, 1968. 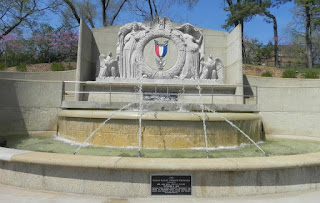 While two bronze plaques explain the memorial’s mission of paying tribute to Eagle Scouts across the “length and breadth of our nation,” there was something about the quality of the sculpture that made me think there must be more to this thing than meets the eye, one aspect being that the large wreathed center – now bearing a beautiful polished aluminum Eagle badge, seemed repurposed. It would make sense, a Scout is thrifty, after all!

I returned home curious about the origin of the sculpture, and set to work tracing its history. What I found was that four copies of this allegorical scene were sculpted in pink granite by German-American sculptor Adolph Alexander Weinman (1870-1952), circa 1910.

They were originally displayed with their giant central clocks over entrances to the two-square-block Pennsylvania Railroad Station in Manhattan, from 7th to 8th Avenues, 31st to 33rd Street. The station had been commissioned by Alexander Cassatt, brother of Impressionist painter Mary Cassatt, and designed by the renowned architectural firm McKim, Meade & White. 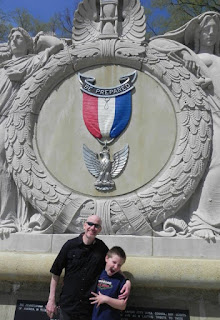 Part of a larger design across the station’s façade, the allegorical scenes originally included a clock in the center of the wreath, surmounted by a tempus fugit winged hourglass. Two female figures representing day and night, are flanked by eagles. Day is surrounded by sunflowers, while the hooded, wing-headed and bare-chested Night grasps two wilting poppies in her right hand.

When the station was demolished over three years beginning in 1963, the sculptures were sent to a landfill in New Jersey where they laid until being rescued by Ivan Karp and the Anonymous Arts Recovery Society.

Another Weinman tempus fugit pair is slated for use in the renovation of a Newark, New Jersey train station. A third Night figure may be found in the Frieda Schiff Warburg Sculpture Garden at the Brooklyn Museum. Elements of the fourth pair remain untraced. A number of the façade’s original 22 eagles reportedly may be found in metropolitan areas up and down the east coast of the United States.