This is the time of year when, because of its proximity to the autumnal equinox, the obliquity, or angle of the ecliptic – the apparent path of the sun across the background stars, is narrow relative to the horizon.

An easy way of illustrating this is with the moon. As a general rule, the moon rises approximately 50 minutes later than it did the day or night before, except during the full Harvest Moon period of September. 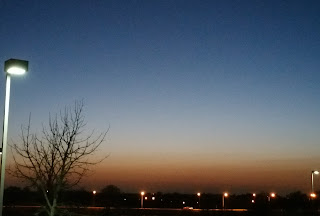 Because of the narrow angle of the ecliptic around the time of the autumnal equinox, the moon rises only about 30 to 35 minutes later each night, and seems to hug the eastern horizon longer before making its way across the sky.

So, here we are just shy of six months on the opposite side of the calendar, not long after the vernal equinox of spring, which means the obliquity of the ecliptic is widest. The effect is that objects will stand higher from the horizon than other times of year, while their speed across the sky remains the same. If you noticed recent waxing crescent moons looking oddly like the ghostly grin of Lewis Carroll’s vanished Cheshire Cat suspended in the western sky after sunset, this is why! 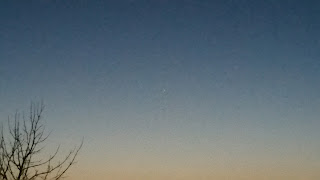 The planet Mercury, one of the five original “wanderers” of astronomical antiquity, is famously elusive even in the best of apparitions. Because it orbits inside the orbit of the Earth, both it and Venus never stand in opposition relative to the sun – that is to say they will never be visible all night long. Instead they are only visible briefly each night, either minutes, in the case of Mercury or hours for Venus, before or after sunset, depending upon which side of the sun they appear relative to the Earth, or of course if they are in superior or inferior conjunction (behind or in front of the sun’s disc, depending on their orbit). 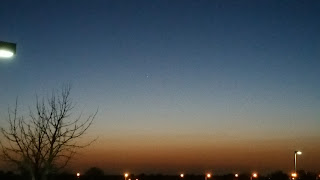 The speedy messenger of the gods is currently shining in the evening twilight at an approximate magnitude of -0.2, making it an easy naked-eye object, and of course bright enough to be captured by my cell phone camera.

If ever you wanted to see Mercury with your own eyes, there is no better time than the present! All you really need is a clear horizon to the northwest.

Mercury’s greatest elongation – when it will appear farthest from the sun from our perspective and therefore highest in our sky, is April 18th. But don’t wait long. The planet’s 88-day orbit around the sun means these apparitions are fast – as befits the messenger of the gods, and the planet will quickly sink back into the glare of the sun toward inferior conjunction in a few weeks, transit across the sun’s disc on May 16th – an event visible from western Europe, eastern North America, Northern South America, and emerge ahead of the sun in the morning sky late next month!