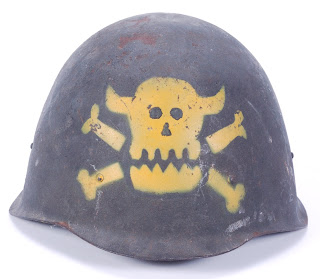 My late father collected international police and law enforcement related headgear, and by the time of his death in April 2015, had amassed a respectable collection. His most exotic examples were a Baden Police spike helmet (circa 1900), a plumed Italian Carabinieri (national military police), Thai royal palace guard, Bahaman spiked pith helmet, and an NVA military police pith helmet. 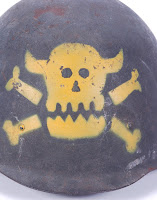 Sometime around 2000 he also acquired at auction, by accident – meaning he was mildly intrigued and happened to win it for the minimum bid, a curious piece outside his usual law enforcement scope. At the time of acquisition, its vague attribution was a Somali death squad helmet. My thought is that it was simply military hardware repurposed by a local militia. Skeptic that I am, though, I’ve always wondered if a finer point may be put on it, and on a whim the other night began to look into it. 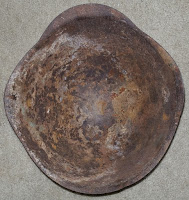 First, the anatomy of the steel helmet: The shell is clearly a stock Soviet M40 style. The liner rivets are copper, which some helmet experts believe point to a North Korean origin, though I cannot confirm it. This particular example lacks the liner, though traces of the steel band remain.

The exterior is painted olive-grey with a light sand finish, and features a striking yellow stenciled horned and pointy-toothed skull and bones. The interior is heavily oxidized, but an Arabic number code “2 – 15” is visible at the back inside rim. 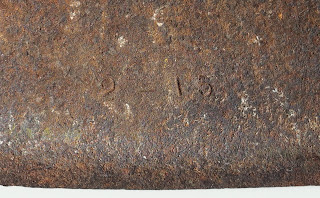 So what of this Somali attribution? Well, let’s check the historical record for clues. The “scramble for Africa” between European powers in the late 19th century saw Britain appeal to Somali Christians, which of course caused friction with their Islamic countrymen, leading them to look to the Ottoman Empire for support. 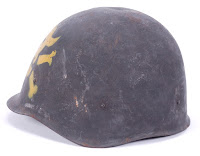 A series of military victories led by Mohammad Abdullah Hassan helped establish the Dervish state, though it had collapsed by 1920 after British bombardments. Enter Fascist Italy with its La Grande Somalia idea.

Italy consolidated political control over Somalia throughout the 1920’s – though never ruling without instability, and by the time Mussolini declared the Italian Empire in 1936, the Africa Orientale Italiana – or A.O.I., it included Ethiopia, Eritrea, and, of course, Italian Somaliland. By the end of 1940, Italy had pushed the British out of British Somaliland and the East Africa Protectorate. 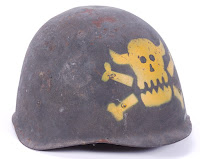 Of course with the collapse of Italian power during World War II, the British regained British Somaliland and eventually conquered Italian Somaliland, which became protectorates until the Potsdam Conference of 1949 granted Italy trusteeship over their old portion. Britain retained theirs until 1960.

Eventually disputes would lead to the Ethio-Somali War, also known as the Ogaden War of 1977-1978, which is where I suspect this helmet came from. In an odd twist of fate, the Soviet Union had been supporting both countries – while the United States had been supporting Ethiopia. At the outbreak of hostilities – when Somalia invaded Ethiopia, Somalia broke ties with the USSR in favor of the USA, while the USA ceased its support of Ethiopia to side with the Somalis – though not militarily.
Interestingly the USA stayed out of the conflict, which saw Ethiopia and her allies, the Soviet Union, Cuba, and South Yemen take on Somalia and her allies, Western Somali Liberation Front, China, and Romania – the brutal authoritarian Nicolae Ceausescu being one to break with Moscow’s official line when it suited him.

War crimes against civilians were committed by both sides, and the conflict only ended when Somalia evacuated back across the border and a truce was declared – though an insurgency continued by the Somali National Army and Western Somali Liberation Front.

So, with both Ethiopia and Somalia having been given Soviet hardware at one time or another,  just whose side was this helmet on? I still can’t say for sure. Historical research can be like that. Could be Somalian, could be Ethiopian. But I’ll let you know if I ever figure it out!