Works by Salvador Dali (1904-1989) – one of the 20th century’s most famous and controversial surrealist artists, can be a rather challenging project for an art appraiser. And I mean challenging in the sense that educating your client about the chaotic background created by Dali’s eccentric personality and habits which might impact the authenticity of their particular work.
In 2016, Editions D’Art Les Heuers Claires published Dali Illustrator by Eduard Fornés. It is an exhaustive work that traces the career of Dali, and emphasizes three of his most striking projects, “Les Chants de Maldoror,” The Divine Comedy,” and “The Sacra Biblia.” The publisher kindly sent a copy to me out of the blue, and I found it more than interesting enough to review.
As an art appraiser I find it valuable, not least for its excellent photographic survey of original handwritten Dali signatures, comparative illustrations, and detailed list of works. For an artist who once stated his object was “to rescue painting from the void of modern art,” it was both puzzling and self-destructive for him to have signed sheets of blank paper that would later be used to print editions of his work, an aspect confronted by Fornés, who correctly points out that certain other artists of the period were doing the same. 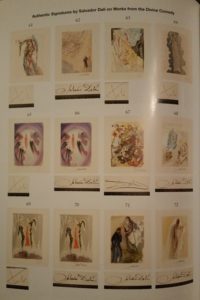 The book begins with an excellent overview of Dali’s life and eccentricities, and to its credit, delves into his talents in generally underappreciated areas and medias, and therefore finally begins to fill the gap in scholarship regarding his career as an illustrator. To that end, it is a pleasant and welcome addition to the reference library of any art appraiser, academician, researcher, gallery, auction house, or collector.
The project was spearheaded by Dali friend and expert, Eduard Fornés, and includes various scholarly essays by other noted Dali experts like Paul J. Karlstrom, Dr. A. Reynolds Morse, as well as expert opinions by Robert K. Wittman and Alfredo Ghio.
Naturally, Fornés’ contribution is the largest, spanning from how he met Dali to subjects as varied as the Gold Medal, Dali and his ‘secret life,’ exhibitions, Dali’s own books, graphic catalogues, and more.
Great care was put into establishing the authority of the experts, Robert Wittman and Alfredo Ghio, in authenticating the signatures by Dali on the works from “The Divine Comedy” and “Sacred Bible,” going as far as official statements from the men, as well as reproductions of their CVs.
Criticism 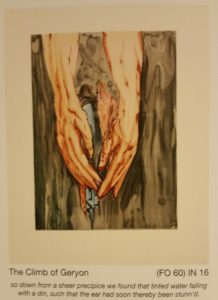 The reproductions of the illustrations are generally very good, though at times verge on being too small for Dali’s level of detail. This is most noticeable in the six-per-page views of “Les Chants de Maldoror.”
Interestingly, I recently showed Dali Illustrator to an Italian colleague and amateur Dante scholar, Dr. Virio Stipa, who was confused by the book’s presentation of “The Divine Comedy’s” canons 16 and 17. To him, canon 16, The Climb of Geryon (La montée de Géryon) in the book actually appears to be the arms of Antaeus.
Further research revealed the paper, Are Dali’s Illustrations of Dante’s Comedy Reflective of the Poem’s Contexts? by the late professor Dr. Wolfgang Everling (d. 2016) of the University of Bonn, identifies canon 16 as Antaeus. Similarly, canon 17, Usurers (Les usuriers) in the book, is listed as Geryon Descending by Everling. 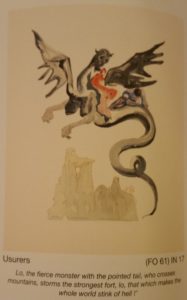 I’m not sure where the titles of the individual works in the book originated, but whatever the truth, ultimately this oddity is for specialists and does not, I think, even begin to undermine the value of the book.
Fornés, Eduard. Dalí illustrator. Paris: Les Heures Claires, 2016. Print. ISBN 2-911386-20-5
References:
Wolfgang Everling: ARE DALÍ’S ILLUSTRATIONS OF DANTE’S COMEDY REFLECTIVE OF THE POEM’S CONTEXTS?
http://www.princeton.edu/~dante/ebdsa/everling.htm
Posted: 8th December 1999, updated 10th August and 25th September 2000.