The Congressional Philippine Insurrection Medal of 1899 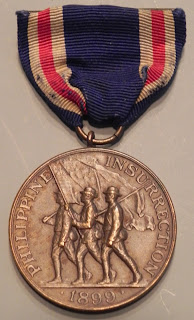 At the beginning of the First World War in 1914, the United States was still a minor player on the world stage. The country’s growing industrial base made it a desirable ally, but the country had not been tested militarily on a large scale since the Civil War. There were numerous minor conflicts between 1865 and 1914, including the Siege of Mexico City (1867), ‘expeditions’ to Formosa (1867), Korea (1871), the Second Samoan Civil War (1898-1899) – which involved Germany and saw the US acquire American Samoa, the Boxer Rebellion (1899-1901), numerous – and often infamous conflicts that fit under the ‘Indian Wars’ umbrella, and of course the Spanish-American War (1898-1899).
Regarding the latter conflict, US Navy Commodore George Dewey had defeated the Spanish fleet in Manila bay on May 1, 1898, but could not occupy the city for three months until a sufficient amount of troops arrived – and after a stage-managed defeat and surrender arranged by Spanish Gov. Fermín Jáudenes, designed to salvage his honor. Meanwhile the wider ‘Span-Am War’ continued until Treaty of Paris was signed December 10, 1898, transferring authority over the Philippines to the United States. 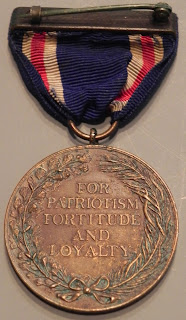 The war was to have far-reaching consequences for the two main combatants. Spain’s loss of territories like Cuba, the ceding of Puerto Rico and Guam to the US, and selling sovereignty over the Philippine Islands for $20,000,000 turned the country inward to address domestic issues. Of course all of this had the opposite effect on the United States. Suddenly the US was a player on the world stage, complete with overseas possessions – as minor as these considerations were.
While the Treaty of Paris transferred authority over the Philippines to the US officially, it was not welcomed by Filipino leaders, i.e. those with true control over the country outside Manila. They simply elected to continue their ‘revolutionary’ struggle against their new governors, the United States, which in time came to be called an insurrection. On the American home front, notables from the American Anti-Imperialist League like William Jennings Bryan, Mark Twain, Andrew Carnegie, opposed annexation of the Philippines.
Nonetheless fighting began on February 4, 1899 and soon broke down into a relentless guerilla war, complete with civilian and military massacres, as well as reports of atrocities by all sides. While history regards the conflict concluded in 1902, resistance and sporadic fighting continued until 1906. In the end, 200,000 civilians are estimated to have perished, 20,000 Filipino troops, and 4,300 Americans – though nearly 3000 were lost to disease, leaving around 1,500 killed in action.
The 59th Congress established a medal for ‘those who followed the flag’ by public law 360 on June 29, 1906, and implemented through War Department order 124 of July 9, 1906.
The medal was struck in bronze, 1-1/4 inches in diameter, and with an oxidized finish.The obverse relief depicts a color guard carrying the US flag, and surrounded by ‘PHILIPPINE INSURRECTION’ and exergue 1899. The reverse shows a symbolic wreath composed half of palm, representing the Philippines, and half of pine, representing self-determination. Centered is the phrase ‘FOR PATRIOTISM, FORTITUDE, AND LOYALTY.’ Mil. Spec. numbered MIL-DTL-3943/196. 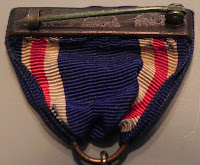 Identifying numbers were stamped on the rim, this particular example bearing ‘No. 6336.’
Ribbons were 1-3/8 inches wide, with the colors ‘Old Glory’ red, white and ‘ultramarine’ blue representing the colors of both the United States and Philippine flags, and were often mounted on ‘full wrap’ brooches. Mil. Spec. numbered MIL-DTL-11589/118.