H.G. Wells Society – Planned Events for 2016 in Woking and Bromley 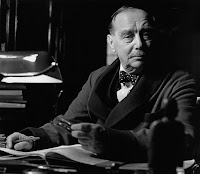 As some of you know, I have studied the life, work and thought of British author H.G. Wells for over 35 years, and it has been my privilege to manage the H.G. Wells Society’s website since late 2000.

2016 marks 150 years since his birth (and 70 since his death), and many events celebrating his life and work are being planned in Woking – where the opening chapters of “The War of the Worlds” were set, as well as his birthplace in Bromley. The following is reproduced from the society’s website. I will periodically repost news here at American Chimæra.

A group of local residents, enthusiastic H.G. Wells supporters, local community stakeholders and voluntary groups have met since end of 2013 to lobby support for an H.G. Wells programme for 2016. With the support from officers at Woking Borough Council, progress has been made in putting together a programme of ideas, projects and events.

Please note that this is not a definitive list, but merely a suggestion of what could be delivered in partnership with key groups and organisations and sponsorship.

Planning in progress during 2015