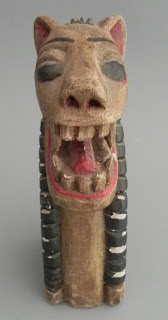 Back when I started working for Manion’s International Auction House in early 1998, I hit it off rather well with my primary supervisor, Dr. Eric Johansson. He was, to put it mildly, an odd bird, and his eccentricity was more than a little off-putting to many people. For me it was what drew us together as friends.

Eric’s encyclopedic knowledge of history was breathtaking. One moment he was rattling off an impromptu lecture to the entire research department on minute aspects of an obscure Roman emperor and his reign (usually inspired by a Roman coin coming through the auction), the next would see him ranting about Napoleon, arguing some point of philosophy, or reciting part of “Beowulf” in a Johansonian dialect of Old English – oh, did I mention the man spoke five languages – English, French, Italian, Swedish, and Old English fluently?

Anyway, as a token of friendship in those early days, he gave me a small carved zooanthropomorphic figure called a Carranca. I remember him explaining it’s ghastly appearance was intended to ward off evil spirits among certain south American tribes. Well, as I didn’t write any of it down, much of his explanation faded, but I’ve always been able to remember what it was called – even if I spent years after Eric’s death in 2002 fruitlessly trying to research the figure with the spelling “Karanka.” Derp. I’ve learned there is a retired Spanish footballer bearing that name, but of course found no information on my little fellow. 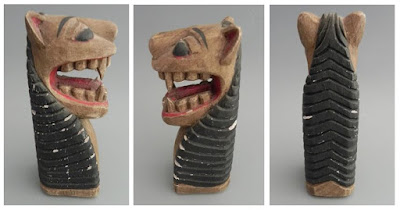 After years of brief whenever-I-thought-of-it moments of research, today I stumbled on the correct spelling and a bit of history about my little guy. Turns out there’s a respectable amount of information about them out there, but precious little in English. These fierce looking buggers were originally carved figureheads for boats, intended to protect boatmen traveling along Brazil’s São Francisco river, through the Nordeste (northeastern) states of Minas Gerais and Bahia. 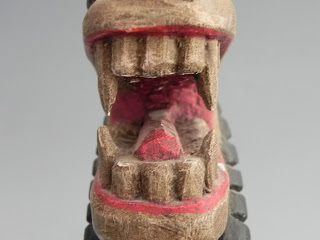 Historians seem to disagree over the time of their earliest appearance, either late 18th or early 19th century. Originals were of giant size, and the vast majority of surviving examples are now only found in museums. My diminutive 5-3/4 inch tall figure was obviously produced for the tourist trade, but does include black painted chalk hair, a deep carved mouth with teeth cut in greater detail than the vast majority of carrancas I see are being produced. Mine appears to be a different and more sophisticated style. I suspect it dates back at least to the 1970’s, if current online offerings and videos are any indication of the simplified patterns being produced.

Oh, if only mine was carved by Francisco Guarany!