May 5, 2015 marks the 70thanniversary of the liberation of Denmark from Nazi Germany, so the latest installment of American Chimera’s e-archeology project of digging up my old Manion’s International Auction House listings and Trendlinearticles features a special piece published in 2000. 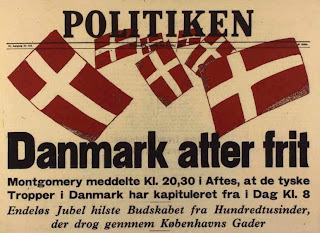 Countless historians have addressed nearly every aspect of Hitler’s insatiable lust for conquest, but the invasion of Denmark is usually mentioned only as an aside to the invasion of Norway.

Danish collaboration is well documented. There was the ever splintering D.N.S.A.P. (Danish National Socialist Workers Party), the complex personality of pre-war Nazi Party member Christian Frederick von Schalburg, and the Frikorps Danmark Division, including its later incarnation as part of the Nordland Division. But less is remembered today of the political climate in Denmark throughout the latter half of the 1930’s that formed the basis for such a collaboration. There was the outward admiration of the German Nazi Party felt by certain people of influence like writers Morten Korch, Johannes V. Jensen, and popular actor Christian Arhoff.

In retrospect, German intentions seemed all too clear before the invasion on April 9, 1940. It seems incredible now how everyone from King Christian X, his Government, to British Prime Minister Chamberlain and Winston Churchill were caught by surprise by the invasion. Aerial reconnaissance had shown German troop and material build up in Baltic ports, as well as increased maritime activities towards Norway. There was even a case of R.A.F. planes strafing German ships in the Skagerrak.

Germany was not invading Denmark and Norway for lebensraum, as was claimed in the eastern lands. The Nordic countries were strategic geographic regions useful to either the Axis or the Allies, whoever got there first. Different also were the peoples of these two nations. They were “Aryans” in the purest sense, and the Nazi propaganda machine churned out some of its most turgid work to differentiate them from the “subhumans” they claimed to be “liberating” the eastern lands from.
Germany has occupied Danish and Norwegian soil in order to protect those countries from the Allies, and will defend their true neutrality until the end of the war. Thus an honored part of Europe has been saved from certain downfall.

The invasion itself was carefully planned and executed, and initial Danish resistance was minimal. The King, Prime Minister Stauning, and Foreign Minister Edvard Munch had inexplicably ignored Army Commander-in-Chief General W.W. Pryor’s previous pleas for mobilization. Nevertheless, minor skirmishes were reported in Jutland, and the Royal Guard traded shots with the invaders around the King’s castle, Amalienborg, in Copenhagen. Thirteen Danish soldiers were killed and two German planes were shot down in the fighting. As it was, the Germans would have their hands full with Norwegian defenses and needed Denmark as a staging area. If there was any thought of continued resistance in Denmark that morning, the appearance of Luftwaffe bombers over Copenhagen quelled it immediately. These bombers had been in route to bomb the capital but were re-ordered to simply fly over by the German Chief of Staff for Denmark, General Himer – at very nearly the last minute.

So, what was it like to live in a German “protectorate?” My wife’s grandparents, who were in their early twenties during the occupation, remember vividly, so I put a series of questions to them about life during those five years. Farmor and Farfar (Grandmother and Grandfather) were living in Copenhagen. Grandfather Eli called Farmor that morning with news of the invasion. The appeal for non-resistance from King Christian X and Prime Minister Torvald Stauning had appeared on the front page of Denmark’s oldest newspaper, Berlingske Tidende. As radio stations came on the air that morning, listeners were told to remain calm and there would be no trouble. The family telephoned one other and their friends all morning for simple reassurances.

There was a short firefight in the street outside their apartment, and a Dane was killed. Flowers that Farmor and Farfar left everyday were always removed by the invaders. Since their apartment was on the ground floor, shots were known to zip through their flat at times, and resistance members knew their door was open for them to flee through and make their escape down an adjacent street.
Nationwide order was kept outwardly, and life went on as it always had, at least at first. Eventually food was rationed with coupons, and became so expensive that the black market was a natural alternative. Clothing was also harder to come by, but the family found ways around that by making needed bits like light jackets from disused parachutes.

By April 10, 1940, Stauning had managed to set up a coalition government between the Social Democrats, the Conservative People’s Party, the Single-Tax Party (Danmarks Retsforbund), and the Radical Liberal Party. On the first anniversary of the invasion, the Danish ambassador in Washington D.C., Henrik Kaufmann signed the Atlantic Pact and handed over bases in Greenland to the United States. Stauning died in May 1942 and was replaced by a fellow Social Democrat, Vilhelm Buhl. Erik Scavenius, who was known for his shrewd work in keeping Denmark neutral during the First World War, became Foreign Minister in July 1943, and was Prime Minister by November.

Curfews also became a way of life. No one was allowed out after eight in the evening, and there were to be no groups of more than five in the streets. After Germany turned on the Soviet Union in June 1941, the Communist Party was banned, and its 246 party members were sent to concentration camps.

Eli had worked on the streetcars during the first few years of the occupation, and then began driving ambulances for the emergency services company Falck in 1943. Evelyn, who was pregnant with their first son in 1940, worked in a delicatessen. They were required to make “Danish Red Cross Food Parcels,” which they later found out were actually for German troops, not that it was a surprise.

Denmark was promoted as “a model protectorate” for its advanced, civilized, and good-natured citizenry, but the seeming conciliatory mood of the Danes towards the occupying Germans had limits. Unlike any other occupied country, Germany allowed Denmark to hold free elections in April 1943. The result was tremendously embarrassing for the Nazis as Stauning’s coalition government was returned by 94% compared to the Danish National Socialist Party’s miserable 2.1%, just three seats.
Evelyn remembers the invaders as friendly and respectful, but all the time aware the Danes were not very thrilled by their presence. When Denmark was pressured by Berlin to enact Anti-Jewish laws, King Christian’s taut reply was a work of art. He said Denmark had no need for Anti-Jewish laws since they did not “share Germany’s fear of the Jews.” Ultimately 492 Jews were arrested and sent to Theresienstadt concentration camp in Czechoslovakia, but a spectacular national effort secreted 6000 of Danish Jews safely across the Kattegat and Øresund to neutral Sweden in October 1943. 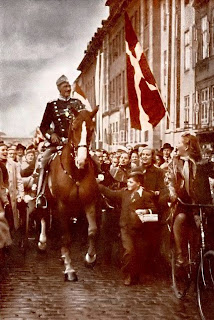 King Christian X was famous for his daily horseback rides through the streets of Copenhagen. As a show of solidarity with his people, he took no bodyguard with him, and when asked why he replied that “the hearts (of all Danes) are guarding the King of Denmark.” He further managed to irritate the invaders by sending a telegram of sympathy to Danish Police who were injured during a riot of 300 local Nazis.

As the war dragged on and the tide turned against Germany, the Danish Resistance increased their activities, and sabotage became one of their most effective weapons. One resistance group known as Holger Danske even boasted my wife’s uncle Harry. The group’s name was inspired by the fictional warrior whose statue sits resolute in the casemates of Kronborg Castle, also the setting for Shakespeare’s Hamlet, in Helsingør. Beneath the castle he dozes in his cold vaults, waking and emerging to defend his beloved Denmark from invaders…
Often Danish resistance was both intellectual and psychological. While theaters that ran films or plays with anti-German sentiments were closed, students would wear the colors of the R.A.F. in open defiance. One newspaper ran an article about how important it was for all Danes to learn English “before our friends, the British arrive.” German authorities were outraged at the implication and ordered a retraction. The paper agreed to right the wrong and the next day encouraged all Danes to learn German “before our friends, the Germans, leave.”

Christian Møller had fled to London in 1942 and founded The Free Danes organization. His BBC broadcasts encouraged resistance, and Berlin ordered reprisals by a ratio of 5:1, five murdered Danes for every dead German soldier. In Denmark they were called “clearing murders” and took the place of public firing squads. In a twist of fate, the much loved priest and playwright Kaj Munk, himself an early sympathizer with the Danish conservative youth, who openly admired the German Nazi Party, was murdered. His body was mounted on a fence post with a sign “swine, you worked for Germany just the same.” In August 1943, Berlin sent an ultimatum to the Danish Government which they refused, and subsequently resigned in protest. The Danish Navy scuttled a large part of its fleet, and civil servants took control of their departments.

When Denmark is Free Again was the title of a pamphlet published by the country’s four largest resistance groups in 1943. It called for legal action against collaborators, and for free democratic elections. Eli and Evelyn remember how the execution of eight Hvidsten group resistance fighters ignited a national strike, and that in September 1944, 2000 members of the Danish Police Force were arrested and deported to concentration camps.

By the time Germany capitulated in May 1945 and British Field Marshall Bernard Montgomery made his triumphant entry into Copenhagen, Denmark had lost nearly 400 sons and daughters. 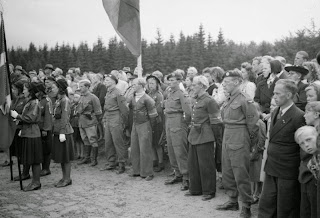 Notwithstanding the brave rescue of Danish Jews in October 1943, in 2005 prime minister Anders Fogh Rasmussen issued an apology for Jews deported by Denmark from 1940-1943, acknowledging the country was not without some measure of failure regarding the Holocaust.

The Danish Resistance Museum, Copenhagen was recently damaged by fire, though happily the artifacts were not. A new museum is scheduled to open in 2017.