The 2003 tornado outbreak between April 30th and May 11th was part of a sequence of severe storms now regarded as one of the most prolific in American history.

May 4th was its most active day, having produced four of the sequence’s six F4 twisters, one of which has become known as the North Kansas City tornado. Some of us directly effected by it call it the Manion’s tornado, or in my case, the Dr. Eric J. Johansson Memorial tornado, after my late colleague. This particular storm traveled 22 miles and had a confirmed F4 intensity at its maximum as it swept through north Kansas City, Kansas. 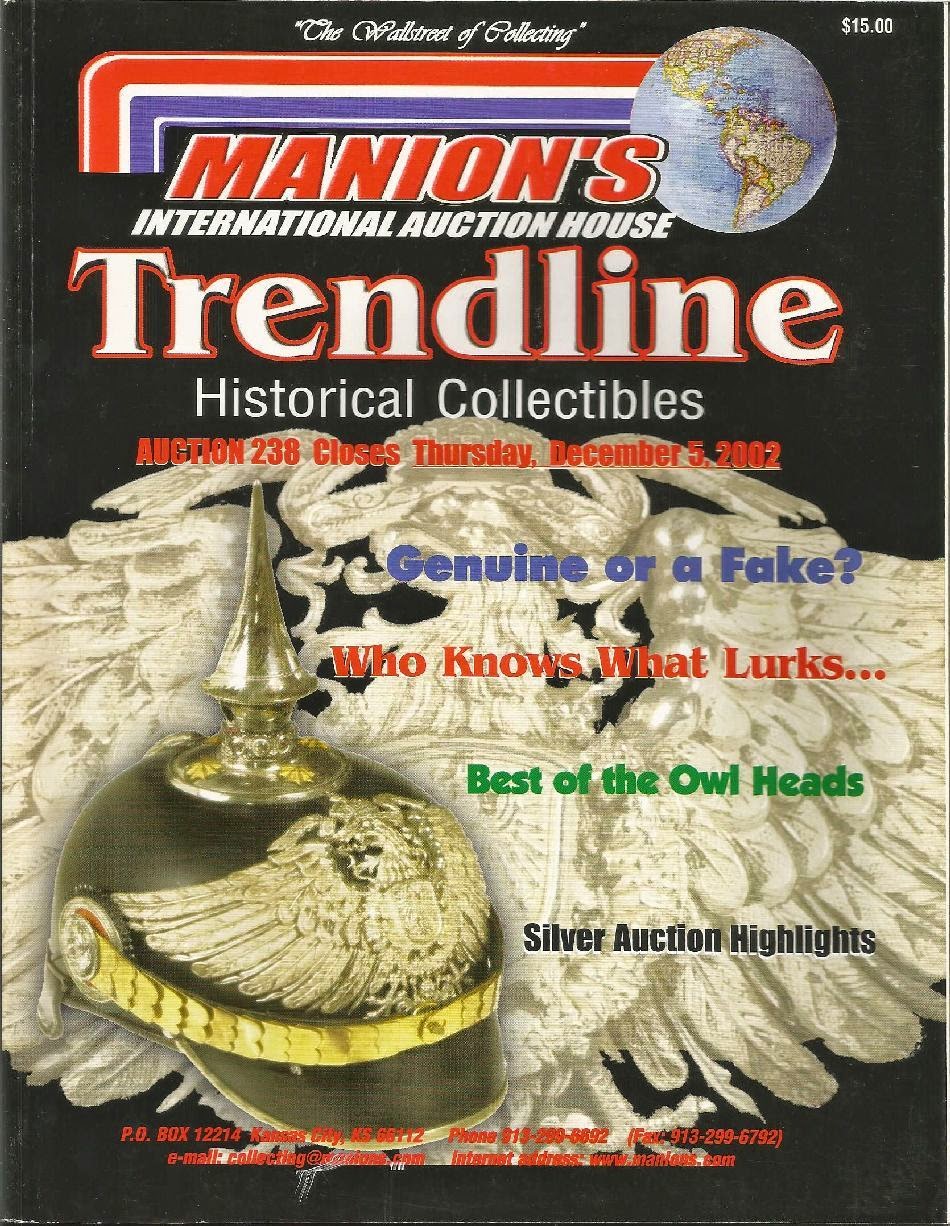 My department’s job was to produce catalogs and online listings for the historical artifacts and collectibles that were funneled to us after being photographed. We examined the lots and wrote detailed descriptions of each. Well, more or less detailed, depending on the mood the most recent accounting figures had provoked in management. 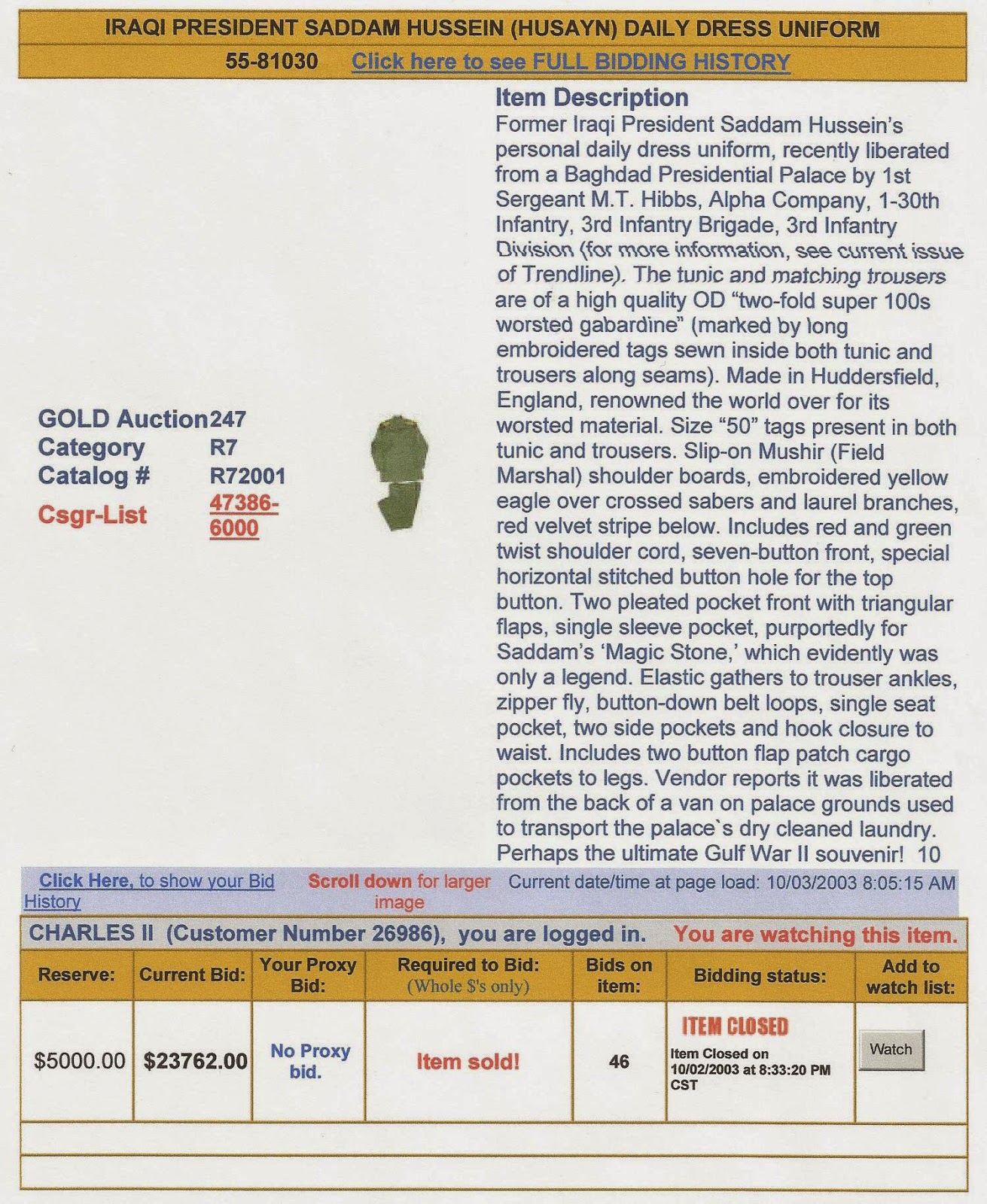 We saw a staggering amount of history and wide variety of things. Medals and badges, field gear, edged weapons and firearms, uniforms, personality items, and even large vehicle and aircraft parts. Most lots were brought to us individually packaged, grouped in large tubs, and transported on rolling carts. An often cranky – but always amusing – warehouse coordinator, Larry, was permanently stationed with us to organize outgoing product and transport it all to the warehouse downstairs.

There was a constant struggle between my department and upper management over volume of production vs quality of production. Management’s love of volume nearly always won by sheer administrative force, but of course paid the price down the road when buyers commented – or complained – about the brevity or incomplete nature of some descriptions. And production numbers weren’t the only area in which we found ourselves often overruled…but that discussion is for another time.
Friday, May 2nd brought one such production battle to a head. Having been ridden hard by management about production numbers for the week, my department of eight had grown restive. To make a point, we decided to overwhelm the warehouse people with more than they could manage on a Friday afternoon. We speedily emptied our hallowed scriptorium of everything but a few tubs of items and a couple of boxed lots, all left on Larry’s cart for Monday morning warehousing. Everyone went home to decompress.

Sunday, May 4th saw the necessary ingredients for a meteorological mess assemble, and by mid-afternoon the sky began to spin. Two tornadoes formed at 3:54 pm and 3:55 pm west of Bonner Springs, Kansas and near Leavenworth, Kansas respectively, while our North Kansas City tornado formed at 4:18 pm near Edwardsville, Kansas.
Damage patterns indicate the storm’s intensity peaked at F4 as it approached the Missouri River bluffs, i.e. exactly where Manion’s was located. The fact that our main building was sheared off at the foundation and the other buildings were damaged or destroyed, the rating seems perfectly accurate. In fact the devastated home nearest the fork at the end of north 67th street has never been rebuilt. The storm’s intensity then fell significantly, down to F1, as it continued on into Missouri, toward Parkville.

As I think back to that afternoon, I’m pretty sure everyone in the area was aware of the severe storms lurking that day. When the first tornado warning came through, we tuned in our local TV stations that had gone wall to wall with coverage.

At the time, my wife, daughter and I were living in south Kansas City, Missouri, about 36 miles southeast of the auction complex. It must have been around 4:25 pm when I walked through our front room, glanced over at the weather update, reporting a tornado on the ground in Kansas City, Kansas. I froze when I saw the vector arrow trajectory of the storm superimposed on a map of Wyandotte County. It looked like a direct hit.

One of my departmental colleagues, Terry, lived just two blocks south of the auction complex, so I called him for a report. He had just watched the twister from his kitchen window and, by his estimate, the storm must have hit or come very close to the auction complex – as well as owner Ron Manion’s home, which was less that 1/10 of a mile to the southwest. Terry walked down the road to survey the situation, and about 20 minutes later called with the news that the building was gone. Ron’s house was narrowly missed, but had still sustained minor damage from blowing debris. We later learned Ron had witnessed the destruction of the auction complex from a safe room in the lower northeast corner of his house.

After a flurry of calls and game of phone tag, the operations manager confirmed what my colleague had told me, and I was instructed to contact those in my department with the option of turning up the next morning for a salvage operation.

A gnawing fear that the storm probably just drove a stake through the heart of the most unique job any historian could wish for was tempered by the memory that less than six months before, Ron Manion had ordered the consolidation of all upcoming auction items in the basement of the main building. He had also ordered the consolidation of all departments under that same roof.

While this decision had been highly controversial at the time, I do remember thinking that it was smart to have all consignment stored in the basement. I then thought that if the main floor had held, auction consignment representing hundreds – even thousands of years of history – would likely have survived.

My thoughts then turned to the rare Prussian Hussar sergeant-major’s attila and pelisse I had finished researching late Friday. It was in fact the last thing I had placed on Larry’s cart to be transported downstairs Monday. What a jest it seemed that these things that had survived a world war might be blown to oblivion by a Midwestern tornado some 85 years after the Armistice.

Early the next morning, we employees parked along either side of North 67th Street and walked down the newly-installed sidewalk from Ron’s house to the auction complex.

Even from a distance one could see the place was devastated. The main building had indeed been sheared off its foundation. The majority of its mass was scattered down the bluffs and surrounding hills to the north and east, or blown across the river into Missouri. All that remained onsite were a few desks, scattered debris, and three distinct piles of rubble. Buried under the pile nearest the southwest corner of the building was my workspace. Other heaps were on the north side, and near what was once Ron’s office in the northeast corner of the building.

The skin and frame of the other building had been completely torn away, and it was as if a giant blender had been at work on its contents. I remember scanning the area on Google Satellite in 2006 – just a year or so after the service came online, and found the low-level images of the complex had been taken during the week after the storm. It gave a great view of the debris field and scattering patterns, and several of us were visible climbing through the ruins.

Anyway, approaching the main building, I noticed a gap between the concrete foundations and crossbeams. Looking between them I could see into the basement, and with relief saw the shelves of consignment still safely stowed. At that point I knew the company could go on, and the mood lightened considerably.

I climbed onto the main floor and began rummaging for the few personal items kept at my desk, and the four dozen or so books I consulted most. Interestingly, I found that because my desk was located in the southwest corner of our room, the two adjoining walls had pancaked onto my area, and served as a protective base of one of the two piles of distinct debris. The result was that I lost nothing from my area, and my computer hard drive and monitor were undamaged.

We spent the early morning on the bluffs and hillside, recovering whatever we could find. A tractor trailer that had been parked along the east side of the main building had been thrown down the hill, coming to rest on a steep incline. Recovery in that thing was like a repelling expedition. By late morning, the Kansas City, Kansas Fire Department came out and gave us complimentary tetanus shots.

By noon attention had shifted to recovering what we could of the company’s formidable militaria and collectibles library. As I recall, the vast majority of the library was found in good, usable condition. Our IT department recovered the company servers which had been blown down the bluffs, and arranged to send them out for data recovery. The process would be successful and see the company back online within a few weeks.

By mid-afternoon we had recovered and stowed what we could, and the main floor was cleared – just in time for a brief rainstorm. Rain soaked through the exposed tile floor and dripped into the basement storage area. This was not cause for too much panic since consignment was mostly stored in sealed plastic tubs, but there were some items too large for tubs, so those were rushed to drier areas.

A week later we had resumed our authentication and copy writing duties in a trailer behind the remains of the building, and by late 2003, a new building – this time made of metal instead of the old board and batten – was erected on the undamaged concrete foundations of the old. The company transitioned from print catalogs to online exclusively. Manion’s was sold to a new owner in late 2005 and hobbled along another eight years before finally collapsing in January 2014.